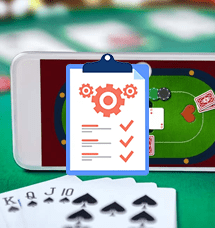 When starting out in the world of poker, it can seem an intimidating prospect. Not only because of the other players, but also because of colloquial poker terms. Whilst to some this provides an extra element of charm to the game, to others it can leave them feeling like outsiders. However, there is no need to let this stop you from enjoying a game which delights and frustrates millions in equal measure, across the world!

In this digestible guide, we will introduce you to some of the most widely used poker terms. Throughout the guide you will notice that most poker terms aren't actually that difficult to decipher, and in fact may even raise a wry smile. By the end, you should be well equipped to use the common language of poker players.

The first poker term on our list is one you have probably heard beyond the context of poker. When related to the game, the ante refers to a contribution each player makes to seed the pot at the beginning of a poker hand.

You can easily remember this from the commonly used term "upping the ante", which generally means to increase the amount of risk/potential reward in a situation. 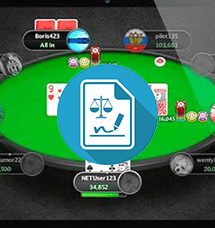 Similar the ante, blinds are forced bets put in by one or more players before any cards are dealt. Typically, this is done by players to the dealer's immediate left.

Blinds are used in most Hold'em games, in place of an ante.

To burn in poker is to discard the first card from the deck, face down. This is done between each betting round as a precautionary measure, to protect against the possibility of any one player glimpsing the next card to be used on the board.

The poker term "call" refers to the act of equalling the most recent bet made. Think of "calling" someone's bluff. Essentially you are matching them, because you don't believe they have a stronger hand than you - or you want to make them think that.

To check is to not place a bet, whilst maintaining the ability to call or raise later in the betting round. You can see this as equivalent to betting zero dollars.

This poker term refers to the first three community cards placed face up together. 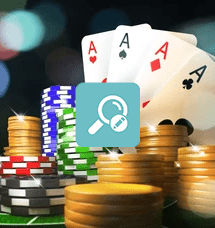 These are the cards dealt face down to a player.

Similar to hole cards, this poker term refers to the unique cards that only the player can see. You may hear things such as "I had pocket sixes", which simply means a player had a pair of sixes in their hand.

Relatively self-explanatory, this common poker term refers to the act of a player increasing the amount of the current bet. This can be done when a player is confident they hold a strong hand, or want the convince others this is the case.

The river refers to the fifth and final community card. Those well versed in poker parlance particularly enjoy the puns that can be made from this term. For example, you may hear phrases such as "he drowned in the river".